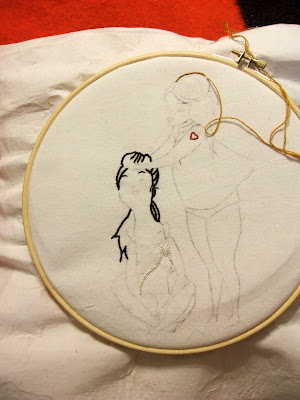 This is what I was working on while we watched the most recent presidential debate. It's a very spur of the moment embroidery idea based on a drawing from Kris Chau's website, that I love a lot. Carbon tracing paper is definitely my friend - I now look at a lot of things and wonder how'd they'd look on a tea towel. I have half a mind to fill the bunny in entirely with french knots. I love the idea of the nubbled effect but not so much the idea of making that many french knots. We'll see.

In my next post I may share my series of Sailor Jerry cheesecake pin-up girl tea towels that happened in much the same manner - I simply cannot sit still and watch television, I have to be doing something with my hands. I'll have to wrangle them all first though, as they long since went into dutiful, if scantily clad, service in the kitchen.
Posted by jennie lynn

Email ThisBlogThis!Share to TwitterShare to FacebookShare to Pinterest
Labels: artsy

Oh, I love embroidery. I know what you mean about keeping your hands busy...I've been quilting in front of the TV this week. Please show the finished product!