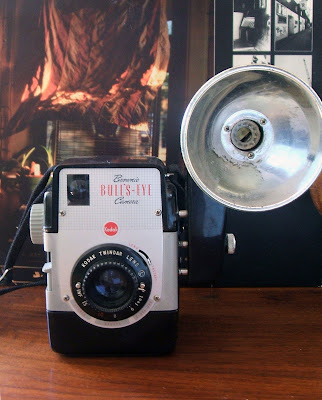 I have a long-standing and unbridled love of outdated technology, as evidenced by my continued use of fifty year old metal ice trays even though my finger tips stick to them when I pull them out of the freezer.
I realized recently though, with a tinge of sadness, that I used to go to greater, more stubborn lengths to do things the hard way. I bought this Kodak Brownie at an estate sale years ago. The model was discontinued in 1958. They no longer manufacture the 620 film this camera needs, but I found out it is possible to respool currently manufactured 120 film onto an old 620 spool and fit it into the brownie. I diligently searched antique shops and estate sales for a stray 620 spool, eventually buying an entire second camera to cannibalize. I was a photo student at the time and I patiently sat in a pitch black room and fumbled the film from one spool to another, put it in the camera and went out into daylight. Later, when I went to develop the film, I found out that it was unusable. All the photos had overlapped one another in a long continuous line. The 120 film was not marked for the brownie, so there was no clear way to know when it had advanced safely from one shot to another.
I suppose I'll try again though, I'm nothing if not a mule.
Posted by jennie lynn